That Time Bear Stearns Top-Ticked Enron On An Initiation

Analysts. A majority are lazy and feel entitled. Most don’t even know why their stock is moving in the middle of the day. My taxable form of employment in the United States results in my having to deal with this group of inebriated minions using others people’s formulas to try the play the game of discovering intrinsic valuation. Which can’t be done as everyone loves to talk about distributions within the norm and relative comparability of value.

Pricing assets is a joke out here.


Wall Street does not believe Alphabet should be at any specific price. Alphabet moves because information changes and flows drive demand, everyday. The market is not efficient for those who are not within the early flood of the information flow each day. If you’re placing buy orders at the open you’ve already lost….enjoy the next 8 hours of your shitty day trying to get a few ticks. It’s all bullshit.

The best of this nonsense is found back in 2001 when the now bankrupt Bear Stearns initiated coverage on Enron because:


“We believe that Enron should be compared to leading global companies like GE, Citigroup, Nokia, Microsoft, and Intel."

The language and the fawning over Enron in the note is enough to make one puke.

Just remember, the following is the kind of horseshit that comes through my team's desks everyday. Information is the grease on the street….not your bullshit pricing of some secondary exhaust asset using old formulas and your “pulled straight from my ass” assumption inputs.  Frankly my dear, no one gives a rats ass what your EV/EBITDA multiple is or what your Pro Forma's are going out to 2023.

On the front page of the January initiation Bear says:

“While the company embraces risk and speed in this regard, it does so with a strong capital and intellectual base, and constantly evaluates its moves to avoid mistakes” 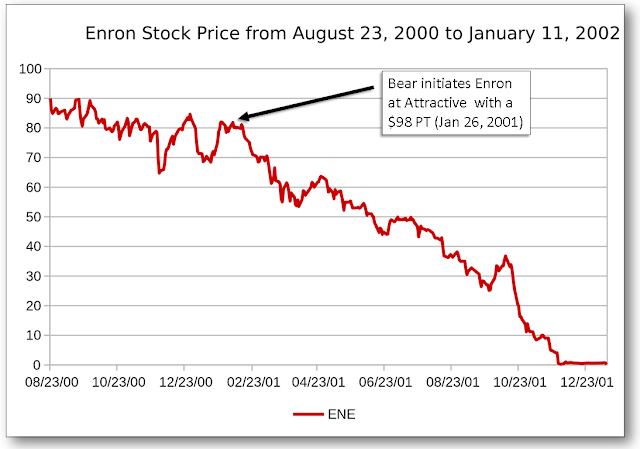 In August 2001 when Jeff Skilling resigned Bear reiterated their Attractive rating but that was only for appearance.   In that note it was very very clear that the Bear analyst Robert Winters was very concerned with Skilling ditching Enron.  Winters writes in the very beginning of the August note:
That second one is the kick in the face to Bear clients.  Remember this isn't only Bear, we see this kind of shit still today with the Alibabas, the Facebooks, the Shake Shacks and SoulCycles, and the rest of these utterly useless IPOs that do nothing for society. 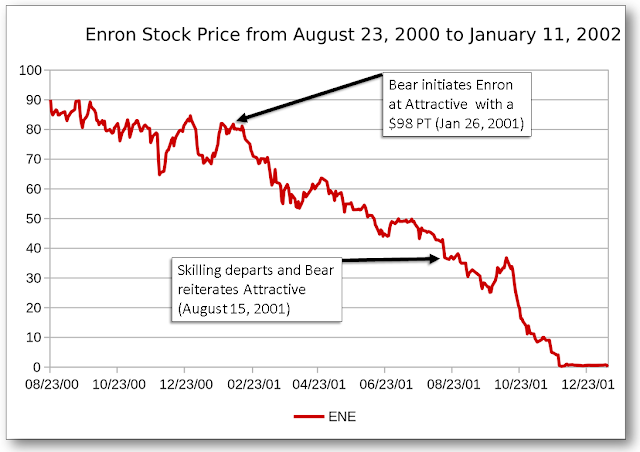 We see it all day and watch these dumpshit fish get slaughtered because they think some Buy Initiation and Mandy Drury's reading of some behind-the-scenes CNBC producer's writing on a teleprompter will move their stock.  The best is when they read How-To books or do anything other than the actual hard-work required to be original in their ideas and unique in their philosophy.

If Bear Stearns did the actual research required to be considered an analyst, they would have been able to recognize what Enron was doing in California.  Much like Valeant analysts in 2015, the Bear guy didn't do the real research.  The Bear analyst wrote this to his clients in the January initiation regarding the California lawsuits related to rolling blackouts and supply manipulation:

This reiteration was designed to keep the idiots hopeful as Bear tried to manage the value of its Stock Loan Agreement it initiated in February 7, 2001, 6 days after they initiated Enron at Attractive.  Here's that email from Sharon Chernick of Bear's legal department to Enron's N. American VP Sara Shackleton:

have made some inquiry and verified that the Bear Stearns Stock Loan enhanced leveraged product is indeed what is under consideration.  As promised, I have a brief step-by-step explanation of such a stock  loan transaction, which is appended to this message. There are actually two possible scenarios: one where cash collateral is used for the stock loan,  the other where actual securities are used as collateral. We understand that, at least initially, you will be using bonds as collateral.  The Stock Loan Agreement is used in connection with our current form of Institutional Account Agreement which ECT may not have signed. I therefore also append that agreement to this message.  I expect you waill [SIC] wnat [SIC] to review these attachments before we speak again.  Again, as a reminder, I will be on vacation from Friday the 16th through the following week. If you would like to speak before hand, or if you have any questions regarding any of the documents, please let me know.

Whatever, it's all bullshit.  Who cares anyways.  These outlets are all working over the public for their own gain, it's nothing new.  Screw it though, the guy on TV says it's a mature business and some two-bit no-name analyst from a brokerage helping the Co. to raise cash and promote its debt on roadshows says Buy so I know I'm making a well-informed decision.

Good fucking luck retail.
Posted by Will Emerson at 8:28 AM