Looks as if Credit Suisse may be ahead of its bigger competitors by deciding to bail as a Primary Dealer in the European Bond market. While the others are busy rigging Libor and “errantly” transferring $6 billion to a reported US Fund overnight with no interest, Credit Suisse analyzed and saw months ago what Barclays highlighted on Friday. In its US Credit note Barclays notes the collapsing market lending market in LatAm/EEMEA which is presenting itself in the aftermath of a slew of 144A/Reg S bond offerings.

Credit Suisse must have decided to bail on the European Primary Dealer market because there’s not much value in term of Risk/Reward on those illiquid and risky bonds that are originating in LatAm & Brazil then dumped in London and on both US coasts. The UK is going to be dealing with some problems as we slowly accept the coming global re-balancing and Credit Suisse knows it so they walked away from the UK gilt risk and the broad European dealer risk.

Friday's Barclays note called attention to the increase in debt offerings as bank lending dries up and corporations stop Capital Expenditures as a means to shore up cash and trim the low hanging fruit liabilities.  Europe continues to mask the failures of this experimental union by launching debt make-up upon their “Butter-Face” economy.

Just as the market deteriorated, one firm backed by European and Peruvian sponsors called Lima Metro Line 2 Financial Limited, rushed to offer just over $1B Senior Notes in the US under an old rule designed to push out large debt offerings without those pesky SEC registration forms. LML's garbage paper was pushed in London and on the US west coast.

“Lima Metro Line 2 Finance Limited, established by a consortium of Peruvian and European sponsors, has selected banks for a global roadshow ahead of a potential 144A/Reg S USD bond sale of US$1.14bn of senior secured notes. The issuer met accounts in Boston and London today, and will head to Los Angeles and London on June 5, leaving June 8 free for investor calls. Citigroup, Morgan Stanley and Santander have been mandated as global coordinators for the bond, which is expected to be rated Baa1/BBB/BBB.”

Banco Agricola is doing this too.  The bank forced BOA/ML and Deutsche Bank to promote its unsecured bond offering in the US, and is spreading that toxic crap from London to the US east coast.

With this LatAm/EEMEA toxicity expanding it’s no wonder Credit Suisse, the smaller of these global banking player, decided to get the f*ck out of dodge.

Brazilian telecoms and airlines are following suit in deciding to use capital markets for funding gaps instead of bank loans.  All this comes at a time when Glencore, the world's largest commodity trading firm, collapses on the tail-end of a super-cycle and reports of the unbelievable "intern can't count zeros"excuse Deutsche Bank is trying to use to explain away a $6 billion overnight loan to a US firm.

In the US though no one seems to care.  The focus this week was on the Ferrari IPO and Valeant.

Hardly an eye was batted at China's lending rate cut (which was mostly expected but the bigger story is that China's smoke and mirrors economic growth is shattering) and the ECB's comment on a possible Deposit Rate cut was ignored in favor of the more clickbaity headlines about Bill Ackman and Biotech.

Maybe the Bloomberg and CNBC interns will recognize the blowout in LatAm/EEMEA corporate spreads and peace together the larger debt-cycle story playing out on a global scale but RutRho Blog won't be holding its breath. 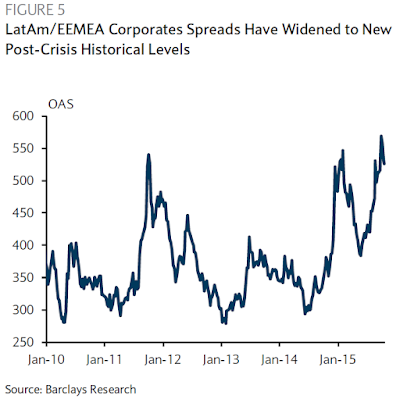 Looking out to the 2017-2018 period it's obvious we are entering a serious house-of-debt-cards scenario.   The US Federal Reserve will have to roll ~$350 billion in debt in 2018 and junk bonds with roll ~$300 billion along with another ~$300 billion in bank loans according to DoubleLine Capitals Jeffrey Gundlach.  Barclays warns in Friday's note:

The global players are beginning to position their money for the 2017-2018 debt roll.  Those chasing Ferrari IPOs and buying options books from guys who believe Alibaba is a "mature business" are going to be smoked because they will not be aware of this issue until its aftermath is reported by the inept "reporters" we see everyday on the informational ghetto's that are 24-hour financial sitcoms.

"Rather go to bed with out dinner than to rise in debt" - Benjamin Franklin
Posted by Will Emerson at 8:45 AM